Researchers from Los Alamos National Laboratory and the University of Milano-Bicocca have designed and synthesized a new generation of quantum dots for use in solar energy systems that overcome previous inefficiencies in harvesting sunlight. The study has been published in the journal Nature Photonics. 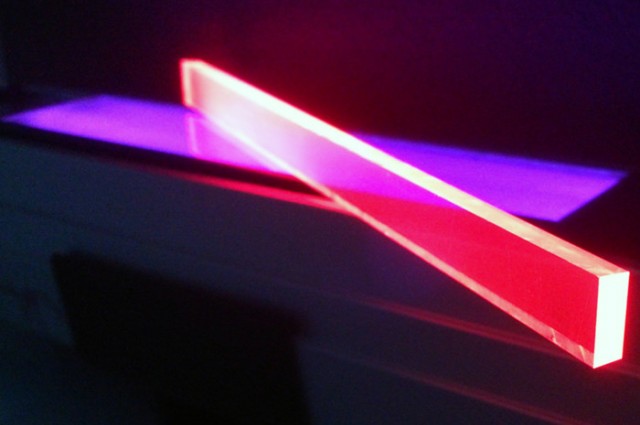 Quantum dots, which are nanocrystals made of semiconducting materials, appeal to scientists for use in solar photovoltaics (solar panel systems) because of their versatility and low-cost. In particular, they are desirable for use in luminescent solar concentrators (LSCs), which are photon-management devices that serve as alternatives to optics-based solar concentration systems.

LSCs are constructed from transparent materials containing emitters such as quantum dots. They concentrate solar radiation absorbed from a large area onto a significantly smaller solar cell, explains Victor Kilmov, one of the authors of the study. One exciting application of LSCs is the potential to develop photovoltaic windows, which could turn buildings into energy making factories.

Although quantum dots are highly efficient emitters, their small Stokes shift (the presence of an overlap between emission and absorption) means that some of the light produced is re-absorbed by the dots, resulting in losses of emission and therefore overall efficiency problems.

To resolve this issue, the team generated “Stokes-shift-engineered” giant quantum dots composed of a cadmium selenide (CdSe) shell which absorbs light, and a cadmium sulfide (CdS) core which is responsible for light emission. This separation of absorption and emission caused a significant reduction in re-absorption losses which previously caused inefficiencies. The dots were then incorporated into a high-quality polymethylmethacrylate (PMMA) matrix, and spectroscopic analysis revealed that re-absorption losses were minimal across distances of tens of centimeters.

The incorporation of the quantum dots into this PMMA matrix is not specific to a particular type of quantum dot; this means that it can be applied to different sized nanocrystals composed of various materials. This technology therefore represents a promising materials platform.