Three Japanese-born scientists were awarded the Nobel Prize in Physics for inventing the blue light-emitting diode, which made possible a highly efficient light source that is increasingly replacing incandescent bulbs. 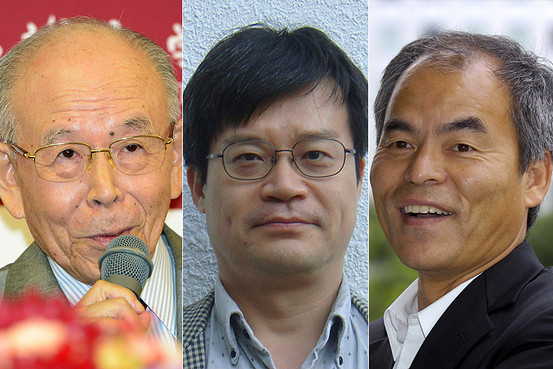 The prize was jointly awarded to Isamu Akasaki of Meijo University and Nagoya University, Hiroshi Amano of Nagoya University, and Shuji Nakamura, who is now a U.S. citizen and a professor at the University of California, Santa Barbara. The trio did the research that led to the prize at Japanese labs.

The award marks a significant transformation in lighting technology. As the 20th century was lighted by incandescent light bulbs, the next hundred years is likely to be dominated by LED lamps—already found in mobile phones, computer screens, televisions and cameras.

“You just have to go out on the street and see that these LED lamps are taking over, replacing Edison bulbs completely, making much longer-lasting, much stronger light to illuminate the world,” said Staffan Normark of the Royal Swedish Academy of Sciences. “And it saves a lot of energy.”

Civilization’s trajectory from oil lamps to the incandescent light bulb to the fluorescent lighting of the early 20th century has been a story of big improvements. With a quarter of world electricity consumption used for lighting, the move to LED lights marks another leap forward.

LED lights can last as much as 100 times as long as standard incandescent bulbs. Unlike fluorescent tubes, they contain no mercury. Their low energy requirement also means that they could be run on cheap solar power. These attributes mean that the more than 1.5 billion people who today lack access to electricity grids may increasingly have access to better lighting.

“The invention of the blue LED is just 20 years old,” the Swedish academy said in a statement, “but it has already contributed to creating white light in an entirely new manner to the benefit of us all.”

A diode is a simple semiconductor device that typically allows current to flow in one direction only. An LED is a type of diode, made from several layers of semiconductor materials, that glows when electricity passes through it.

Red and green diodes have been around for half a century; what was needed was a diode that emitted blue light. The idea was to combine the three and thereby produce the white light needed.

Dozens of labs and companies threw themselves at the problem. Despite three decades of intense effort, no one came up with a useful diode that emitted blue light. Drs. Akasaki, Amano and Nakamura eventually cracked the problem.

One promising material for a blue LED was gallium nitride, but making a crystal from it in the quality needed proved to be extremely difficult. In 1986, Drs. Akasaki and Amano were the first to create a high-quality gallium nitride crystal. In 1992, they came up with the first diode that emitted blue light.

“Initially, people said this research wouldn’t be completed within the 20th century, so colleagues left, one after another,” Mr. Akasaki said, speaking at Meijo University where he remains a professor at age 85. “It never occurred to me to abandon it. I just continued doing what I wanted to do. It didn’t matter to me whether I would succeed or fail.”

Dr. Nakamura independently began to develop a blue LED in 1988. Two years later, he made high-quality gallium nitride. He also gained renown in Japan for winning a lawsuit to get additional payment for the invention from Nichia Corp., the lighting-products company where he did his research.

The trio later worked together to invent a blue laser in which the blue LED, tiny as a grain of sand, is an important component.

In the most efficient light source, a single electron introduced into the device would lead to the release of a single photon, a particle of light. Current LEDs are now at roughly 50% efficiency.

“These LED sources are getting close to the theoretical maximum. You won’t get anything that’s 10 times better,” said Per Delsing, chairman of the Nobel Committee for Physics.