A new redox flow battery designed at the Pacific Northwest National Laboratory (PNNL) more than doubles the amount of energy that this type of cell can pack in a given volume, approaching the numbers of lithium-ion batteries. If the device reaches mass production, it could find use in fast-charging transportation, portable electronics and grid storage. 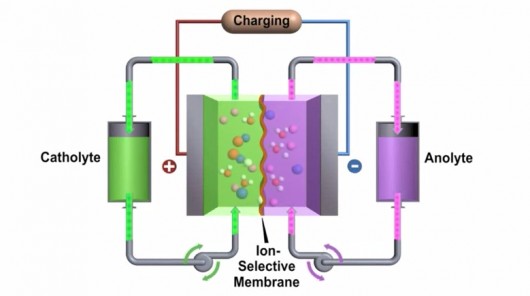 A flow battery is formed by two liquids with opposite charge (electrolytes) which turn chemical energy into electricity by exchanging ions through a membrane. The electrolytes are stored in two external tanks and this makes the system easy to scale up, potentially very quick to charge (the electrolytes can simply be replaced) and resistant to extreme temperatures. These perks have already inspired some radical concept car designs but if these dreams are going to come to fruition, flow batteries will need to get over one big hump: currently, the best flow cell out there only packs less than a third of the energy per unit volume as a lithium-ion battery.

Because of this, flow cells are mainly used where space is not at a premium, such as to store large amounts of energy from renewable sources in open spaces. Still, even in this arena, a more energy-dense flow cell could turn out to be very useful, improving the reliability of the electric grid in a tight urban setting, and perhaps even challenging the upcoming lithium-ion home batteries announced by Tesla.

PNNL researchers led by Wei Wang have now developed a prototype, high-performance zinc-polyiodide flow battery with a high energy density of 167 Wh/l (watt-hours per liter), a number that could almost double to 322 Wh/l with further optimizations.

This is a significant step up from the state-of-the-art 70 Wh/l zinc-bromide flow batteries and means that, 40 years after being invented, the performance of these cells could finally catch up with that of the now ubiquitous lithium-ion batteries. For comparison, lithium iron phosphate batteries, a type of lithium-ion battery used in portable electronics and some small EVs, put out about 233 Wh per liter.

Aside from being able to store more energy in a smaller space, the zinc-polyiodide battery is also reportedly safer than other flow batteries through the absence of acidic electrolytes, it’s non-flammable, and it can operate at ranges of -4 to 122 °F (-20 to 50 °C), meaning it doesn’t require extensive cooling circuitry that take up extra weight and room (like in Tesla’s Model S battery pack).

Before the battery can see mass production, the researchers will need to address the issue of a zinc build-up that grew from the negative electrode and permeated through the membrane, reducing the battery’s efficiency. Wei and team contained the problem by adding alcohol to the electrolyte, and are now experimenting with scaling up the battery size in order to conduct further testing.